90% of Gas Cylinders in Nigeria are expired – FG 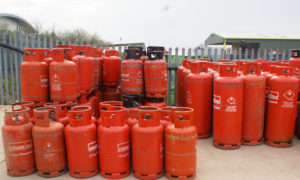 These figures were given by Programme Manager, National LPG Expansion Implementation Plan (Office of the Vice-President), Dayo Adeshina, at the just concluded 7th Annual LPG conference and exhibition, held in Lagos according to Vanguard report. Adeshina, also disclosed that about 90 percent of the cooking gas are in expired gas cylinders. Industry reports showed although low utilisation of LPG constitutes a source of worry to the government; it remains more worried about the danger associated with the use of expired cylinders. Consequently, it has raised an alarm over the non-testing and proliferation of expired gas cylinders in circulation across the country, saying cylinders outlive their safety after 15 years. Adeshina, said most cylinders in Nigeria are over 30 years old and are very dangerous for use. He, therefore stated: “Things need to change in the industry. Today, everybody wants a cylinder but in most developed countries where LPG plays active role, marketers are rightly the sellers of cylinders. “This is because from when it is manufactured, it passes through proliferation after five years, with Standard of Organisation, SON, running its test and certification.  All of these processes take 10years. After 15 years, the cylinders should be withdrawn from the market. But today how many of us can attest for manufacturing date of the cylinders we have in our homes? There are cylinders that have been with us for 30 years and have not been tested or certified. Our investigation has shown that over 90 percent of Nigerians are using expired cylinders” Suggesting the way forward to attract Nigerians from the use of ‘firewood and kerosene’, he called for massive awareness campaign, saying “The mindset of Nigerians has to be changed to reason why LPG should be preferred”.